Season 5 has been terrific so far, with all new different matchups and team by team battle this season is a truly pure basketball mentality.

From (8) teams last season, we trimmed down to (6) well selected and evaluated players and teams Cityhoops MNL Season 5 is far more balanced.

To all new players we welcome you and we are grateful that you enable to participate in our league.

Let’s summarize the teams this season and their outcome as per the standings results as we enter week 5 of CHL-MNL Season 5.

At this time, this team Washington is a very much talented roster coached by Oliver “Oztech” Zapanta, with a for formidable scorers Robert “D Twister” Cunanan, Eric “Wingman” Aurelio and Calvin “Bae” at the Center makes this team a complete visceral contender this season 5 as they topped the standings. Take note this team has depth back up players Rojenval Perez, Rommel Manalo, Bernard Diaz, Alfon “Ageless” And Chris “Clutch” Vallejo who are ready for a strike.

What a revelation for newly revamped New York for Coach/Commish Dex whose taking his team in upper standings. With several new rookies, this Season New York made good draftees that didn’t disappoint Coach Dex!

The power of Point Guard! Yes, this team had been playing well and sniping too. As this team emerged as an upsetter to any teams this season. Roy “On Point” Mabutas is taking this team to a new level of competitor.

Coach Dennis tanked this team with mid sizes but with speed and high IQ in basketball.

This team has all the assets and scoring weapons with its heavy back up players
Ritchie DelaCruz, Norman Retuta, Gurpreet Singh, Randy De Guzman that are already battle-tested and ready for a roll.

The “Comeback is Real” and “D Melo OG Touch” Florida by Coach Melo is once again unleashing its basketball sorcery.

This team had fought a lot of battles! Win or lose Texas had established a good team relationship from crunch to clutch time.

Plus having Brian Agustin, Raymond Ramirez, and Dennis Gordo makes the team more efficient and balanced on offense and defense. Don’t sleep on this team as they will prey you down last seconds. Texas knows how to close games down a crucial and buzzer-beating situation.

The Reigning Champs last season made a set back as this team is at the bottom of the standings. Coach Brian Garcia will have to make more adjustments as the last regular games get closer leading to playoffs.

Scorers for California Jun “Got This” Mabanta, Jer Escondo, Juan Sanchez, and Rich Monesterial will need to reshape more offensively as they will need to reconnect as a team and maximize the talents they have.

Aris Abregana, Orlando Lavarias, and Louie Bautista are much needed to contribute heavily in scoring production.

We are getting close wrapping up the regular season games and we can’t wait to see the final matchups. All teams are still showing up they’re A+ games and trying to put a show whose better this season 5! From stats to all parts of scoring titles all players must rise and grind. 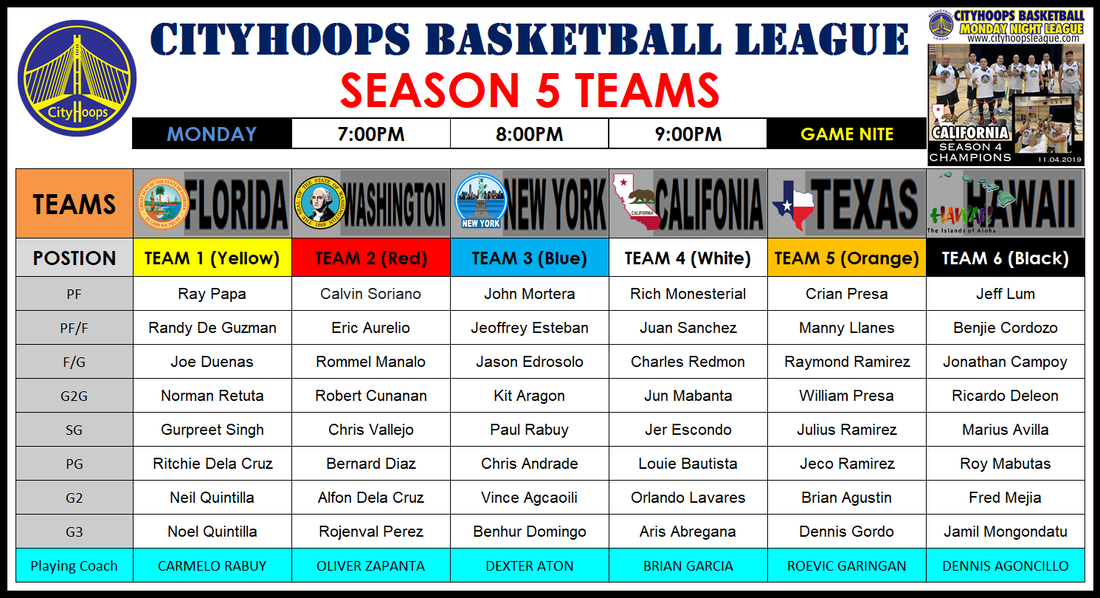 This was a game of trench down the last minutes of the game.

New York managed to win again over Arizona for a spot in Finals. Coach Dex had a healthy game plan over Arizona.

Raffy “Meester Brown” Uzak and Zak Uzak were the main factors for New York’s victory to advanced to Season 4 Finals.

For Arizona, it was a good start for them during 1st half considering one of their main scorers were not able to start “TJ Bituin” (injury)

This was a big loss for Arizona as they were expected to win and get a revenge win over New York from a loss during a regular-season game.

New York is on a final stage again and will face a dominant team in California.

California rises to its game level in a classic match-up game.

Russel Medina and Tito Romasanta were just unstoppable with their fiery shots and hustle plays.

Coach Melo and he’s Florida crew were able to stay close and got a 2 points lead at the late 2nd half that made them relevant when Roy Mabutas hits a big 3 and a quick 2 points lay up to stay in the game.

But California was just ready for a kill when Russel Medina and Mark Correa made threes that gives them a full boost lead.

California and New York will be playing for CHL-MNL Championship Season 4.

This could be a dog fight and brawl of the ball.

Coach Dex and Coach Brian will showcase its talent in winning and forming coaching.

A new match up and two different styles of plays and game plan.

These two teams ended with the same regular standings and only points separated them at the seeds of rankings.

Can’t wait who will conquer this Season 4 finale.

New York and California this Monday, November 4, 2019, marked this date as new Champs will rise for CHL-MNL Season IV.

We are not accepting registration for season 5!
PLAYER OF THE GAME & TEAM STATS - click here..