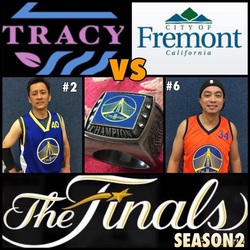 "ONE GAME, ONE RING, AND ONE CHAMP"

​Jason Concepcion, "The Brutal & Vague" and Robert Cunanan,  "The Twister" was once "A Dynamic Duo" or 1-2 punch last season for Tracy.

It was the tides  who brought their fate to  play against each other and meet,  and have a chance to face off each other and show they're skills  they've got in this 2nd season CityHoops Finale.


These Two Contender has what it takes to win in any form of rage and game plays.

​Now as they became Arch Rivals and Nemesis inside hardcourt and in CityHoops League.

This is a battle of True Blood of "Kampampangan contra Kampampangan."

One Game, One Ring, and One Champ.

Coach Rodel Flores "The Smooth" will be returning  and competing at the Finals Stage for 2nd time as Tracy Chieftain and with he's heavy reinforcement Tracy roster.

Will this be he's chance to conquer the ring after a back loss from ousted Oakland.

Only task  is, he's facing he's former team mate Jason Concepcion, "The Brutal & Vague" of Fremont what a reunion for these individual players that will face and compete each other.

One thing we know about Is, One of them will be crowned the New Champs of Cityhoops 2nd Season This Sunday.
GAME 1 : TRACY 41 vs UNION CITY 39

A tremendous epic-playoff game.  Tracy continued to rise and will go to the Finals.

It was a back to back scoring game between these two teams, who played like there's no tomorrow to finish the game.

Union City tried to make a lead basket by basket and yet couldn't finish a strong play at the last minutes.  Union City had been consistent with their game tactics and was always been A Dark Horse team this season.

But for Tracy they have all the tools of scoring responses.  With John Armas, "The Newly Wed," who was able to show versatility and perform some vulnerable basket that led Tracy on top of the game.
​
GAME 2 : OAKLAND 41 vs FREMONT 48

A game that led to a unexpected Win.  Fremont restrained the Defending Champs Oakland to a sudden loss last Sunday.  It was a big blow win  by Fremont who played smart basketball and defensively.

For Fremont this was a vendetta win specifically for "The Brutal & Vague," Jason Concepcion, who never won against Oakland in the last 4 occasions.

Winning against them was just the beginning of reckoning of Fremont.

Oakland played good and occurred some  vital plays, but Fremont was more prepared and aggressive with a well executed defensive play.

Now we are sure that Oakland won't be the Champs this Season.
MORE HIGHLIGHTS