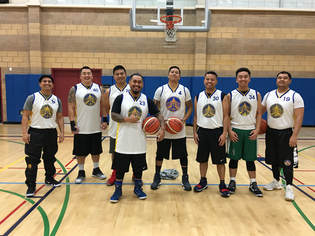 San Francisco captures its 1st win of the season against ravishing Daly City.   It was a very competitive physical basketball last Sunday when these two teams faced,  feels  like a no tomorrow game.  Emotions were high, and the urges to win was so raging for both teams.

With a four (4) seconds left at the game, Daly City made a huge error of calling a “Time Out” when they had no more  (TO) left. That gave Daly City an automatic technical, and that San Francisco was given a two(2) free-throws, Jason K “Big Strike,” converted a 1 out 2  tech free-throws that gave them a lead.

And San Francisco was able to take control and manage a composure defense throughout the game; even on the dying seconds.

◦           For the veterans Jojo P and Lito M, they will need to regroup and replan a new game stray in order to survive the Western Conference come playoffs time.

We are in halfway season now, and so far all games are showing intensity and head shaking results.

East and West conference are  getting tighter at the top seeds.

Bottoms teams are on the rise to shine and ready to make heavy statements on the court.

CityHoops season 6 teams are proving something beyond no limits.  Underdogs  will become underdogs,  Elite teams will try to keep the momentum, and until the last dying-seconds Cityhoops games will all be unpredicted till last dead ball.​
MORE HIGHLIGHTS